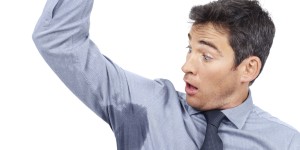 I’m not trying to raise a big stink about your sweat; however, I would like to share the sweaty truth about your perspiration:

By now you may be asking yourself:  “What does Stan find so inspiring about perspiring?” Here’s your answer:  There is a correlation between the interaction of the apocrine sweat and the eccrine sweat and a statement that Jesus made.

In Matthew 16, Jesus warned the disciples about the “yeast” of the Pharisees and the Sadducees.  Paul taught the same concept when he wrote to the church at Galatia:   “A little yeast leavens the whole lump of dough.”

In the Bible, yeast is symbolic of sin, and Jesus and Paul used this symbolism to warn of the harmful effects of false teaching.  A little bit of it has a tremendous amount of influence.

What effect does the leaven of sin have on your prayer life? In Revelation 8, John likened the prayers of the saints to the sweet smelling incense that was burnt on the golden altar.  When they find their way to the throne of God, do your prayers have the smell of incense or do they have a stench?

The next time Mother Nature cranks the thermometer up to about 100 degrees and your shirt is drenched in sweat, you might want to give some thought to this stinking blog.