In this age of reality TV there’s a vast array of channels with do-it-yourself (DIY) programs. Many of these are food-related and highlight the cooking skills of kitchen-famous chefs.

A pioneer of the DIY cooking was the Queen of Cuisine, Julia Childs. Aspiring chefs would jot down her mouth-watering and salvia-stimulating recipes and file them away for a special occasion.

Good recipes are the key to stirring-up some tasty treats, and even an inept cook can appear to be a polished chef when he measures and mixes according to a cookbook.

The recipe for a good and godly life is more likely to be found in the Bible than it is in a cookbook by Gordon Ramsay or Rachel Ray.  While your status as a cook can change by following a good recipe, your standing before God changes when you follow His Word. This is why we are encouraged to hide God’s Word in our hearts—it is the key ingredient to a robust and healthy spiritual life.

By the way, if you need to sweeten that favorite dish just a little, add a pinch of God’s Word—Its sweeter than honey and the honeycomb (Psalm 19:10). 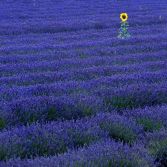 It happened yesterday; it was one of those bright light moments of fresh comprehension. As I was reading Psalm 9, a verse stood out from the rest like a sunflower in a field of bluebonnets.

The words that caught my attention were a positive affirmation of God’s faithfulness: those who know Your name will put their trust in You.

At certain times and places, God would use a specific name to reveal His character to His people.  Many of the Psalms speak about the nature of God. From the many, I share a few that encourage me to put my trust in God:

Then, there is Psalm 18:2 which is a compendium of God’s attributes. As you begin a new week, I encourage you to think about it today:

I will love You,  O Lord, my strength.  The Lord is my rock  and my fortress  and my deliverer; My God, my strength, in whom I will trust; My shield and the horn of my salvation, my stronghold.

A person’s path in life will be shaped by the trails he walks and the trials he endures. I’ve walked many trails that have been scenic adventures, and I’ve encountered several trials that were dismal and disappointing.

There will be times in life when nothing makes sense.  The trail will seem too steep to climb and too long to endure. When David experienced a situation like this, he realized that God had already walked where he had never gone and could see what was beyond his vision.

David said: When my spirit was overwhelmed within me, then You knew my path (Psalm 142:3).

The next time you have a tussle with a trial, remember that:

I have told you these things, so that in me you may have peace. In this world you will have trouble. But take heart! I have overcome the world (John 16:33).

Because I don’t like the government tinkering with my sleep pattern, I’m not a fan of Daylight Savings Time. I’m hoping the government will eventually learn that you can play with a clock, but you can’t turn back time.

It takes some people months to adjust to the change, and they stumble around like a zombie, saying: “I’m bushed.”

Whether it’s an interruption in your sleep or some other issue, there are times when most of us have felt like we’re weary, worn-out, and at the end of our rope.  If this sounds like you, you may need to get Am-bushed.

To understand my terminology, think with me about the plight of the Hebrew people during the Old Testament days of the Pharaoh. The Jewish people were in bondage and in need of help, so they cried out to God in prayer. The answer to their prayers came in the form of a desert-dwelling, leather-skinned, sheep-herding, soon-to-be-deliverer by the name of Moses.

At this point in his life, Moses was disillusioned. He wasn’t living the life to which God had called him, and he was running on empty as he yearned for that elusive something that would change his life.

Then it happened, and it was anything but ordinary.  Moses saw a burning bush, heard a voice, and turned aside to wipe the sand out of his eyes.  Was he seeing a mirage or was he dizzy due to the searing heat of the desert?

It was no mirage–it was majesty.  The burning bush was a bush that didn’t burn; it was ablaze, but it wasn’t consumed.

It was a spectacular sight to Moses, and he was stunned and astounded when God’s voice resounded from the bush: I’ve seen the affliction of my people. I have heard their prayers. I know their sorrows. I’m going to deliver them.

Even more shocking to Moses was the news that he was to be the deliverer.  In need of confirmation, Moses asked, “Who shall I say sent me?” God replied, “I AM THAT I AM.”

Moses’ life changed on that day when he was Am-Bushed. He felt as though he lacked eloquence, but God assured him that he was a diamond in the rough.  He felt empty, so God filled him. His life had been meaningless, so God gave him purpose.

The life of Moses is an epic account of how God uses the ordinary to accomplish the extraordinary. It’s the narrative of what God can do through you.

How would life, as you know it, change if churches and faith-based organizations went on strike and no longer contributed to the needs of society? The void of services would sound a mournful echo reverberating with the shock waves of desperation.

An article written by John Stonestreet, calls attention to the significant role Christianity plays in the daily life of the USA. According to Stonestreet:

One in six hospital beds in our country is located in a Catholic hospital. In at least thirty communities, the Catholic hospital is the only hospital in a 35-mile radius. This doesn’t even take into account hospitals run by other Christian bodies such as Baptists, Methodists, and especially Seventh-Day Adventists.

The next time you’re tempted to give a cold should to a warm-hearted ministry, you might want to weigh their heavy presence. The doors of these faith-based organizations swing open to bear the load of the needy to provide food for the hungry, clothing for the impoverished, and a word of encouragement for the frequently despised.

An inflection point can be defined as a moment of dramatic change, especially in the development of a company, industry, or market (American Heritage Dictionary).  Wall Street defines it as a point on a chart that marks the beginning of a significant move either up or down.

Due to the stress and strain of the moment, inflection points can be hard to recognize in the present, and sometimes they are more easily seen from the perspective of history.

A significant inflection point in the Old Testament involved the Hebrew nation and its long awaited and highly anticipated move into the Promised Land.  Instead of crossing over to claim a fertile promise, they chose to hunker down in a dust-choking, water- deprived wilderness.

The dramatic change in the life of this fledgling nation occurred when they listened to the report of 12 spies.  The majority report was given by 10 spies, and this faith-deficient report nullified the needs of the nation.

The minority report was given by Joshua and Caleb. Their vigorous faith painted a different trajectory as they spoke of the vast resources of the Promised Land, and they invited their fellow Hebrews to join them on a journey to the land of milk and honey.

It only takes a casual look into the pages of Scripture to discover several other inflection points:

When faced with a critical decision, your choices can be evaluated with a few simple questions.  Perhaps David and Demas could have negotiated theirs better, if they had consider their situation in light of these:

I’ll close with the wise counsel of Solomon:  Trust in the Lord with all your heart, and do not lean on your own understanding. In all your ways acknowledge him, and he will make straight your paths. Be not wise in your own eyes; fear the Lord, and turn away from evil (Proverbs 3:5-7).

Some people live their lives wildly chasing dreams that eventually leave them feeling empty and hollow.  I thought of this yesterday when I read five words from Psalm 34: Seek peace and pursue it.

As I thought about this verse, it occurred to me that a sense of fulfillment and satisfaction is the result of what we pursue in life.  The writings of Paul validate this statement:

It’s been said that whatever catches your attention, catches you.  Have you been ensnared by the false hopes of groundless dreams or have you captured the peace of God that is beyond human reasoning?

As you start a new week, I hope the words of Peter will encourage you to focus your thoughts on the peace of God. He said: Seek peace and pursue it. For the eyes of the Lord are upon the righteous and his ears are open to their prayer (I Peter 3:10-12).

Two days ago, I said good-bye to Larry Patton.  He has been a great friend, and one who has served by my side at First Christian Church for the past 30 years.  Larry wore a smile on his face; had a song in his heart; and, he was an asset to my ministry.

As a tribute to him, I want to share the comments I made at his funeral.  Here are Ten Lessons from the Life of Larry:

When I think of Larry, I think of Psalm 37:23: The steps of a good man are ordered by the Lord, and He delights in his way.

I thank God for the way you shared your wit, wisdom, and gifts for God’s glory.  May your influence live long in the life of your family and in the life of FCC.

To most people who believe that God is omnipotent and that He is all powerful, the quick and easy answer is a resounding, “No!”

As you think about your answer, I offering the following:

The next time you get down in the dumps, and feel as though God has abandoned you, I hope you’ll review this list and remember this final thought: Before you were ever aware of God or thought about loving Him, you were already the object of His love.

Like most mornings, I started today with a cup of coffee and my Bible. While I was reading, I thought about God’s wonderful deeds for mankind, and my lack of gratitude:

Let them give thanks to the LORD for his unfailing love and his wonderful deeds for mankind, for he satisfies the thirsty and fills the hungry with good things.

This morning I give thanks to these people I’ve never met:

Expressing gratitude and giving thanks are themes that run throughout the pages of the Bible. In his second letter to Timothy, Paul wrote: I thank God . . .  as I remember you 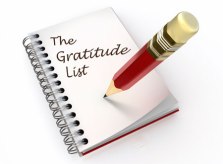 constantly in my prayers night and day (1:3).

I encourage you to mimic Paul: Take some time today to reflect on the past year; express your gratitude, and say thanks to those who have helped you along the way and made your life a little easier.