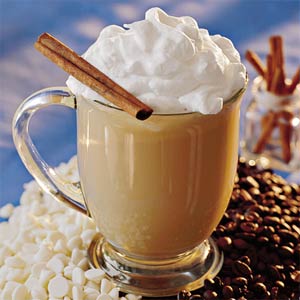 When it comes to my morning coffee I usually drink my first cup of Folgers at about 5 AM. I’ve never drank a latte or a cappuccino, and I probably never will.

For all the Starbucks stylized hype about coffee, there isn’t much of a difference between latte and cappuccino. Café Latte is Italian and translates into “coffee with milk.” Since my taste buds reject any hint of milk, cream, or sweetener, I’ll keep mine simple—just black.

I read that the average price of a Starbucks latte starts about $3.50. That is about 6 times more than what I pay for my simple cup of black coffee at McDonalds—thank you Sr. Discount!

What can we do to change lives here at home and around the world? If we give up the price of a cup of coffee for a week, month, or year, are we sacrificing? What kind of an impact could we make if we gave up the price of a coke, a birthday gift, a dip of ice cream, or a cable TV channel?

What in the world is wrong with society today? I’ve heard that question asked several times this week. People were shocked when they heard that an Australian baseball player and college student in Oklahoma had been shot by 3 teenagers.

The news media quickly laid the blame for this incident at the feet of the absent parents and the socio-economic conditions in which the boys lived.

I disagree. I think the problem runs much deeper, and it is a result of a subtle change in the way society views truth.

The view of truth that is permeating our society is called relativism, and it mistakenly believes several things:
• Truth is whatever you belief
• Self is the standard of truth
• Truth is not determined by an outside reality

If there is no objective truth, to what then do we appeal when there is a clash of paradigms? The murder of the young baseball player is an example of cultural values that are void of absolute truth. The mentality that prevailed was: What is yours is now mine and your life has no value when it runs contrary to my selfish desires.

Call me old-fashioned, but I still believe in the righteous truth of God’s Word: Righteousness exalts a nation, but sin is a disgrace to any people (Proverbs 14:34).

There have been several times that I have ended this blog with phrases like:
• I hope that’s enough to keep you thinking
• Think About It!

I do this because I know the importance of controlling our thoughts. When a person embraces a new way of thinking, it will lead to a new way of living.

When Paul wrote his letter of instruction and rebuke to the church at Corinth, he spoke of “taking every thought captive to obey Christ (2 Corinthians 10).” Paul believed that the undisciplined life of these people could be changed, if they were willing to discipline their thoughts.

If we fail to dwell on “these things,” are we giving squatter’s rights to unwelcome guests? Do we make room for doubt, despair, and depression? Are thoughts of excellence overcome by mental mediocrity? Do helpful thoughts become hurtful thoughts? Are principled thoughts compromised? Do we think more of reconciliation or retaliation?

I’ll close with the wise words of Solomon: As a person thinks in his heart , so is he (Proverbs 23:7). So, how are you thinking?

When properly used a skilled carpenter can take a hammer and easily drive a nail deep into a piece of wood. When improperly used, by a makeshift hack, the hammer may smack the nail of a thumb. While both are nails, they are designed for different purposes.

When I have hit my thumbnail with a hammer, the result has been a bruised, swollen, and throbbing thumb. When people see my thumb, they make an assumption: The thumb was either hit by something or some heavy object smashed it.

Paul speaks of this in Romans 1:20: “For His invisible attributes, that is, His eternal power and divine nature, have been clearly seen since the creation of the world, being understood through what He has made.”

Ron Rhodes makes an interesting comment about this: “Just as crime scene investigators, archaeologists, cryptographers, copyright office workers, and people who see skywriting find evidence of intelligent beings’ activity, so also we can clearly see evidence of intelligent design in the universe. Substantial evidence indicates that an intelligent being intentionally brought our universe into existence and that the universe was not the result of random chance or a cosmic accident. Such evidence serves as the primary focus of the academic field of intelligent design (Rhodes, Ron (2010-03-01). 5-Minute Apologetics for Today (p. 147). Harvest House Publishers. Kindle Edition).

My Hammerology comments are closely related to the apologetics of William Paley who used the analogy of a watch and the Watchmaker. In a nutshell, Paley surmised that if someone found a watch in an empty field, that person would logically conclude that it was designed and not the product of random formation. Paley believed if this was true of the watch and the Watchmaker, it should be true of life and the universe.

If a person would conclude that the intricate design of a watch requires a Designer or Watchmaker, isn’t the same true when a person considers the complex design of the universe?