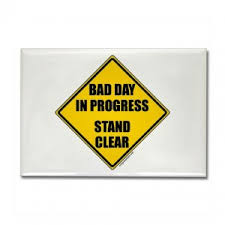 One of the central figures of the Bible is David. This king from the Old Testament was no magician, but he witnessed one of the greatest vanishing acts in the history of mankind.

While David and his men were away from their camp and in the heat of battle, some of the enemy had managed to ransack the camp and take the people hostage.
David and his men returned to the camp in hopes of a good meal and a restful night’s sleep. When they arrived, they learned of the tragic events that occurred a few hours earlier. The grief-stricken and heart-broken soldiers were overcome by their emotions and began to blame David. Their loyalty vanished, and bitterness reared its ugly head.
David began to experience the bad day blues. When times like this happen to us, we can learn from the 4 Don’ts of David’s Day (I Samuel 30:1-8):
1. Don’t Stuff Your Emotions (David wept and cried out to God)

2. Don’t get bitter.
(1) Whenever we internalize our feelings too much, the pain intensifies and we lose perspective.
(2) We look for whoever is available, and we begin to play the blame game.
(3) Whatever the reason, we need to look for the opportunity to forgive (Ephesians 4:32).

3. Don’t go it alone (David encouraged himself in the Lord). David moved from an internal focus to an external focus and eternalized his perspective—He began to look at his situation through God’s eyes.

4. Don’t do nothing—Do something! David began to fight the present evil. Assess your situation, get advice from wise friends, right the wrongs that you can, and move on with your life.

Annie Johnson Flint wrote the following words, and they are appropriate to our discussion:

Think About It!
Stan