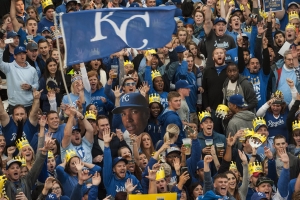 If you know anything about sports, you know that the Kansas City Royals just won a hard fought and entertaining battle on the baseball fields of Kansas City and New York; and, they have been crowned World Series Champions.

With child-like enthusiasm, baseball fans from near and far are descending on Kansas City today to celebrate with the Royals.  They will savor the sweet taste of victory and delight as their team winds its way through the streets of Royals Town USA.

The language of sports has been spoken for thousands of years.  Paul used the competition of the Isthmian Games as means to share spiritual truth.  He also spoke of a parade of champions that features Jesus as the parade Marshall:  “Thanks be to God, who always leads us in triumph in Christ, and through us spreads and makes evident everywhere the sweet fragrance of the knowledge of Him (2 Corinthians 2:14).”

The parade route in Kansas City with be lined with thousands of spectators, and it will be a great time for adoring fans to shout out to their favorite players.  The procession that Paul spoke of is one of triumph that calls you to more than a mere spectator.  You are to be a participator and speak up for Jesus.

You are the means through which God spreads the sweet fragrance of His love and mercy.  Wave your banner, and give thanks for the victory you have in Him.