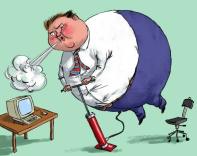 Due to safety and environmental concerns, Toyota has recalled 3.37 million cars.  The recall involves 2.87 million cars due to faulty emissions control units. Another 1.43 million vehicles are included to repair air bag inflators that could be ineffective.  Of the 3.37 million, Toyota thinks 930,00 of them may be affected by both defective units.

Several years ago I witnessed an event that led me to a conclusion:  Most defective air bags have faulty emissions control units.

While I was in college, I was a frequent spectator at the Texas Rangers games.  At one of these games, a rude air-bag-of-a-man strutted by me, and He was wearing a shirt with an imprint that was much too vulgar to be worn in public.  This defective airbag had some real problems with his emissions control system, and he turned the air blue with his profanity.

Before the second inning started the security guards were recalling this air bag.  He was ushered out of the stands with blood gushing from a gaping wound that was the result of a frustrated father’s attempts to preserve the innocence of his son.

Defective air bags are characterized as a person who is foolish or boisterous:

The need for emissions control predates the advent of the auto.  Paul admonished the church at Ephesus to manage their manners and to watch their words: “Don’t let even one rotten word seep out of your mouths. Instead, offer only fresh words that build others up when they need it most. That way your good words will communicate grace to those who hear them (Ephesians 4:29).”

I’ll leave you with a thought that might help you with your emissions control: Profanity is the weapon of the witless and a weak device to support an even weaker argument.