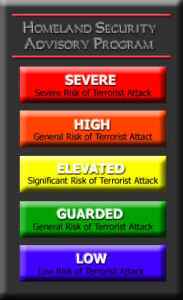 An article in the Saturday edition of the Washington Post caught my attention: “The U.S. military has boosted security at all of its stateside bases and stations, broad recognition that the United States has heightened its awareness of a possible attack inspired by the Islamic State militant group, U.S. officials said Friday.”

With this report following on the heels of the recent incident in Garland, Texas, it was a frequent topic of discussion on Saturday morning.  When the security level is raised it gets a person’s attention.

Pentagon spokesman, Army Col. Steve Warren said: “The military believes there is an increased and predictable security threat at home, with extra precautions, ID checks and searches launched across the country. It does not mean that an attack is considered imminent, however.”

How would your behavior change if you were told the danger is most certainly “imminent”?  You may not be aware of it, but here is a statement that warns you are in grave danger!

Keep your mind clear, and be alert. Your opponent the devil is prowling around like a roaring lion as he looks for someone to devour. Be firm in the faith and resist him, knowing that other believers throughout the world are going through the same kind of suffering.  ~I Peter 5:8-9

Watch your back, there’s a lion on the prowl.