Some people look at nature and see the beauty in the flowers.  I walk through the baking section of the grocery store and see beauty in a bag of flour. I like bread, and I’ve eaten more than my share of Wonder in hope that its enriching ingredients will build me a strong body in eight ways.

Even though bread is a tasty treat, Jesus said: Man shall not live by bread alone, but by every word of God (Luke 4:4). To be enriched, a person will consider both the physical and spiritual dimensions of life. While bread benefits one, God’s Word enhances the other.

When you read the Psalms, you can see that God’s Word is beneficial for several reasons:

In Psalm 19, David lists several advantages of including the God’s Word as a part of your daily regimen: The The law of the Lord is perfect, converting the soul; the testimony of the Lord is sure, making wise the simple; the statutes of the Lord are right, rejoicing the heart; and, the commandment of the Lord is pure, enlightening the eyes (Psalm 19:6-8).

I encourage you think of God’s Word as an essential vitamin, and remember to take your daily dose.

Let the word of Christ richly inhabit your lives. With all wisdom teach, counsel, and instruct one another. Sing the psalms, compose hymns and songs inspired by the Spirit, and keep on singing—sing to God from hearts full and spilling over with thankfulness. ~Colossians 3:16

Do you know what happened in the world of golf this past weekend?  If you’re a golfer, you know that the British Open was played at Saint Andrews. If you’re a serious golfer, there’s a good chance that you know that Nick Faldo was the last Brit to win the Open.

Faldo had a miserable first round as he shot a tournament-worst 83. He was able to redeem himself with a 1-under score of 71 on Friday, and he credited his success to the advice of his kids:  They persuaded him to wear his lucky sweater.

During his career, Faldo won six majors; three of them were wins at the British Open.   In each of the wins, Faldo was wearing one of his signature sweaters. When he putted for the last time on Friday, his kids had convinced him to wear the same one that he had worn in 1987 and 1990.

Faldo’s sweater reminds me of my years in the Air Force, and the uniform of the day.  Everyone in the squadron was required to wear the same uniform which was determined by the events of that day.

Like Faldo and the military, there is a uniform of the day for Christians.  Paul described it as the “full armor of God” in Ephesians 6: 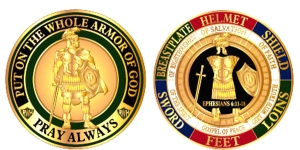 The four items above are the uniform that equips us for the events of the day.  Our struggle is not found on a golf course, a baseball diamond, or a football field.  Paul said it is a wrestling match with a powerful opponent:   “This is not a wrestling match against a human opponent. We are wrestling with rulers, authorities, the powers who govern this world of darkness, and spiritual forces that control evil in the heavenly world.  For this reason, take up all the armor that God supplies (GW).”

Paul knew that a lucky sweater was not enough to win this battle, and he knew that he needed more than just a bullet proof vest. He concluded his list for the uniform of the day by including prayer:  “With every prayer and petition, pray at all times in the Spirit, and to this end be alert, with all perseverance and requests for all the saints.  Pray for me also, that I may be given the message when I begin to speak—that I may confidently make known the mystery of the gospel, for which I am an ambassador in chains. Pray that I may be able to speak boldly as I ought to speak (NET).”

When you stand in front of the mirror to see how well your clothing fits, review this list to make sure you’re wearing the uniform of the day.