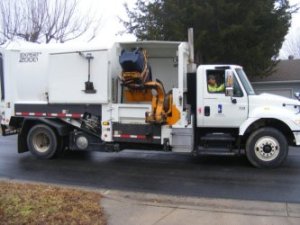 Before I went to bed last night I performed my Wednesday night ritual of emptying all of the smaller trash containers into the larger trash bags. These bags were then carried outside and the recyclables were placed by the street. The nonredeemable trash was placed in the big blue bin where it awaits the arrival of the one arm bandit thing this morning.

Because it is unpleasant and smelly, people usually don’t hoard trash. The same can’t be said in regard to our moral shortcomings, ethical lapses. We’re orderly in the way we deal with our physical trash, but neglectfully forget our spiritual garbage.

I’ll stop before I raise too much of a stink and give you the verse that got me to think: If we say that we have no sin, we deceive ourselves, and the truth is not in us. If we confess our sins, He is faithful and just to forgive us our sins and to cleanse us from all unrighteousness. If we say that we have not sinned, we make Him a liar, and His word is not in us (I John 1:8-10).

Ever thought about Jesus as a one arm bandit who will remove your sin?