When the last Easter egg has been found and eaten, and the kids have said “good-bye” to their sugar high.  What remains?  I hope it is more than chocolate stains and a few extra pounds that were added by way of the calorie-packed candy, and other Easter delights.

One thing that will always remain is God’s Word, and it is a unique book.  The uniqueness of the Bible is seen in its unity. This book is a collection of 66 ancient documents that were originally written in 3 languages: Hebrew, Aramaic and Greek. Even though 40 different authors, wrote over a span of 1,500 years the theme and message of the Bible is consistent.

In my Easter sermon yesterday, I mentioned Jesus’ encounter with two disheartened disciples as they walked down the Emmaus road.  To help them understand the events surrounding His crucifixion, Jesus, began “at Moses and all the Prophets, and He expounded to them in all the Scriptures the things concerning Himself (Luke 24:27).”

The life of Jesus fulfilled multiple prophecies.  Long before He was born, it was predicted that He would be flogged; die with the wicked; and, He would be buried like a rich man.

Prophecy is important because it confirms the claims of Jesus.  Here are just a few of the many He fulfilled:

The Bible has stood the test of time; and, when it comes time for you to be tested, it will stand with you.

This is the time of year when the mystery of the Old Testament prophets is understood in the fulfillment of that pinnacle of prophecies—the incarnation of Christ.  The birth of Jesus is the axiom of Christianity. 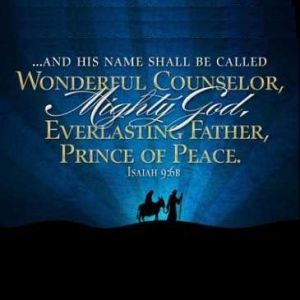 Today is Christmas day, and it is the day when the dignity of Deity was clothed in human flesh and was born in an insignificant manger.  Today we celebrate the birth of the Magnificent Messiah and the Savior of the world, and we can truly sing, Joy To The World.

His name meant “victory of the people,” but Nicodemus was living a life of spiritual defeat that left him thirsting for something more.   His religious zeal had left him parched and perched.  The dryness of the religion he had practiced from the time of his birth had withered his soul, and the conundrum of messianic proportions left him sitting in a precarious position.

It was within the framework of this nodus that Nicodemus went under the cloak of darkness to find Jesus and said: “Rabbi, we know that You are a teacher come from God; for no one can do these signs that You do unless God is with him.”

Even though Nicodemus could see the signs he was blind to his sins, so Jesus went straight to the heart of the matter:  “I say to you, unless one is born again, he cannot see the kingdom of God.”

Like many people today, Nicodemus thought he had lived a good live.  After all, he was a Pharisee and even a member of the ruling council—the Sanhedrin.  He was no religious malcontent, but he questioned the content of Jesus’ discourse.

If he followed Jesus what course would his life take?  Would it would lead him away from Judaism and the prestige and prominence of his position?  Was he ready to sacrifice everything that he had worked so hard to achieve?

Nicodemus decided to wander away to ponder and pray.  I believe Nicodemus re-examined the Messianic prophecies and they validated the claims of Jesus.

When the third chapter of John comes to a close, Nicodemus is never head of again until Jesus is crucified.  Then he came out of the darkness to identify with Jesus and to prepare the body of His Lord for burial.

Which stage of Nicodemus’ life best describes you?  Is it the under-the-cloak-of-darkness Nicodemus, the closet-Christian Nicodemus, or is it the stand-up-and-stand-out for-Jesus Nicodemus?