Have you ever had that feeling that you’re being watched? It may be more than just a feeling. Comparitech, a company that is known for its, Thousands of hours of in-depth tech research, has discovered, the world’s most-surveilled cities.

After studying the use of closed-circuit television (CCTV) cameras, the researchers at Comparitech have discovered the top 20 cities in the world that are the most surveilled. Of the cities that made the top 10, all of them were in China except London and Atlanta.

The proponents of CCTV cameras say they are excellent tools to help prevent crime and to monitor the flow of traffic. There are many, however, who see a sinister use of this technology. Specifically, the detractors are concerned with the development of facial recognition and the prying eyes of big government: Will the use of this technology make for a safer society at the expense of individual liberties?

While big government might abuse and misuse this technology, it’s much different with our Big God. Solomon said the eyes of the Lord are in every place, keeping watch on the evil and the good (Proverbs 15:3, NKJV).

When God sees the evil and the good in the world, we need to remember that His justice is balanced by His love, mercy, and grace. In Genesis 6:5, the Lord saw that the wickedness of man was great in the earth and that every intent of the thoughts of his heart was only evil continually; however, three verse later, we see that Noah found grace in the eyes of the Lord.

What does God see when He observes your life? May it be a life of justice, kindness, and humility (Micah 6:8). 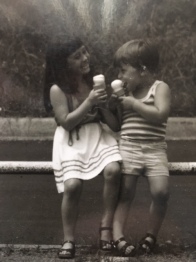 I was reminded of my kid’s pretty please this morning while I was reading in I John 3:22-23: “Whatever we ask we receive from him, because we keep his commandments and do the things that are pleasing to him.  Now this is his commandment: that we believe in the name of his Son Jesus Christ and love one another, just as he gave us the commandment.”

After reading this verse, I was left with two questions:

Micah 6:8 is the answer to the first question, but it leads to a series of other questions: What does the LORD require of you? To act justly and to love mercy and to walk humbly with your God.

After thinking about all of this, I’m still left with one question: Do I act justly, or do I just act?  How about you?

Dallas, you are in my heart and on my mind.  I am praying for the people who reside within the boundaries of this great city, and those who live in the suburbs.   I’m also praying for those who do their best to serve and protect the citizens of this ever-growing metropolitan area; my heart bleeds blue for the slain officers.

Early reports this morning say these officers were shot by a black man who was frustrated by the recent shootings in Louisiana and Minnesota.  Just as the actions of this man do not represent the majority of the people who marched last night in a Black Lives Matters protest, the questionable actions of a few cops do not represent law enforcement officers as a whole.

Vengeful acts of rage that are perpetrated on the innocent as retaliation against a perceived injustice are the illogical acts of malcontents who are a boiling pot of rage.  The tragic events of last night are evidence that a mind that seethes with anger is a mind that is primed to explode.

Please join me in praying for the people of Dallas and the LEOs and first responders across this nation who enter harm’s way to serve and protect us.

First of all, then, I urge that supplications, prayers, intercessions, and thanksgivings be made for all people, for kings and all who are in high positions, that we may lead a peaceful and quiet life, godly and dignified in every way.  This is good, and it is pleasing in the sight of God our Savior, who desires all people to be saved and to come to the knowledge of the truth.  For there is one God, and there is one mediator between God and men, the man Christ Jesus, who gave himself as a ransom for all, which is the testimony given at the proper time. ~I Timothy 2:1-6

In Colossians 3:11, Paul used just 6 words to convey a massive amount of truth:  “Christ is all and in all.” When I read this succinct statement about the indescribable Christ, I remembered a brief description of the Bible.

The Bible in 50 Words,  uses statements consisting of 2 words to describe the 66 books of the Bible:

Along this same theme of profound brevity, I suggest there is one verse in the New Testament that summarizes the life of Christ better than any other:

Great indeed, we confess, is the mystery of godliness: He was manifested in the flesh,vindicated by the Spirit, seen by angels, proclaimed among the nations, believed on in the world, taken up in glory.  ~I Timothy 3:16

I will close with this question:  What are the 50 words that define you?