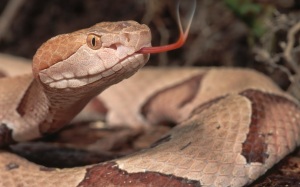 Ever since Adam and Eve listened to the smooth talking serpent in the Garden of Eve, and they were snake bit by listening to his bad advice, people have been wary of snakes.  Evidently a man in San Diego should have exercised a little more caution.

When Todd Fassler was bitten by a rattlesnake earlier this month, he joined the ranks of the other seven or eight thousand people who will be bitten by a venomous snake this year.  Of that number only 5 or 6 will succumb to the poison and die.

Since he was bitten, Fassler has learned that snake bites can be both painful and sickening as well as expensive.  He almost relapsed when he learned his hospital bill came to a total of $153,000.

Some snake bites can take a toll on a person’s physical health, but there is another one that is even more deadly when the discussion turns to spiritual consequences.  The snake bite of sin only has one cure and it is Jesus.

To illustrate this, Jesus, referenced an incident in Numbers 21 when he was speaking to Nicodemus:  “Moses lifted up the serpent in the wilderness. In the same way, the Son of Man must be lifted up; then all those who believe in Him will experience everlasting life.”

Before you toy with temptation and tinker with sin, you may want to think about the consequences:  The price might be much higher than $153,000.